A LAW FIRM INVESTED IN YOUR STORY Schedule a Free Consultation 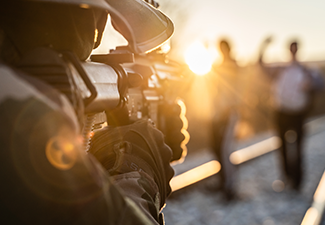 According to GunPolicy.org, the percentage of Tennessean adults living in a household with a firearm stood at 47% in 2004. The right to keep and bear arms is one of America’s most fundamental rights solidified in the U.S. Constitution.

However, federal and state laws may restrict that right in certain circumstances. Tennessee has strict laws restricting the use of weapons in some situations and even banning specific types of weapons.

At the Law Office of Joshua S. Reed, our attorneys represent clients facing weapons-related charges throughout the state of Tennessee, including Knoxville, Farragut, and surrounding areas. Our skilled attorneys work tirelessly to ensure that the impact of gun crimes upon our clients is minimized.

Weapons violations are associated with some very strict penalties and long-lasting consequences, which is why it is imperative that you retain a knowledgeable criminal defense attorney.

Weapons charges in Tennessee are not limited to firearms. Under state law, almost any object can be considered a weapon for criminal sentencing purposes. State laws in Tennessee govern the possession, use, sale, and transfer of firearms, handguns, explosives, and other weapons.

Depending on the facts surrounding each individual case, weapons violations in Tennessee can be charged as either a misdemeanor or a felony. The two most commonly charged gun crimes in the state are:

Many people in Tennessee face criminal charges for possession of a prohibited weapon. Our weapons violations defense attorneys at the Law Office of Joshua S. Reed have extensive experience handling a variety of gun-related criminal offenses in Knoxville, Farragut, and other parts of the state.

As of July 1, 2021, most people 21 and older are not required to obtain a permit to carry a handgun in the state of Tennessee. Under the open handgun carry law, eligible Tennesseans can carry loaded handguns openly or concealed in most public places. The law also allows most people to carry unloaded firearms as long as the ammunition is not in the immediate vicinity.

The law makes it lawful for Tennessean adults to carry handguns without a weapon as long as the following requirements are met:

However, the law makes anyone convicted of domestic violence, stalking, or DUI ineligible for handgun carry without a permit. The same restrictions apply to felons and people who have been committed to mental institutions.

Where Weapons Are Prohibited

Generally, the law in Tennessee prohibits all carry of weapons, either openly or concealed, in:

The following places also prohibit the carrying of weapons if there is a posted “No Firearms Allowed” sign:

If you are not sure whether or not you are permitted to possess and carry a firearm in certain locations, consult with a knowledgeable attorney who can explain the local laws and regulations to you.

What Are Unlawful Weapons?

Certain types of weapons are prohibited under state law in Tennessee. Specifically, state law prohibits the possession, manufacture, or transport of the following unlawful weapons:

Possession of any of the above-mentioned weapons can be charged as a felony in Tennessee. If you or someone you love has been charged with possession of unlawful weapons, reach out to a skilled criminal defense lawyer to learn about your defense options.

Typically, penalties for weapons violations depend on several factors, including the nature of the offense and the defendant’s criminal record. Even if it is your first-time weapons-related offense, however, the consequences can be quite severe. Some of the penalties include incarceration, fines, and additional penalties for underlying crimes.

Many people who do not understand gun laws in their state get into trouble with the law. Weapons violations are associated with some very strict penalties and long-lasting consequences, which is why it is imperative that you retain a knowledgeable criminal defense attorney.

Our weapons violations defense attorneys at the Law Office of Joshua S. Reed are dedicated to providing each client with compassionate and personalized representation. If you have been charged with or are under investigation for a firearms-related offense in Knoxville, Farragut, or other parts of Tennessee, our attorneys can help you get through this trying time and fight for the best possible outcome in your case. Schedule a consultation today to discuss your situation.